Discover the Père-Lachaise cemetery and its historic monuments in an unusual way by solving puzzles using your smartphone.

Play with friends and discover the heritage in a ludic way
Solve puzzles and break codes
Influence the course of the story with your choices
Meet historical figures in augmented reality
Ready for the adventure ?
Got to the RDV
I a ready !
Let's go !

The Brotherhood of Eternity

Your friend Aurore, curator of the Père-Lachaise cemetery, discovered a cryptex in a fractured tomb. Esoteric inscriptions are engraved on the mysterious object.

She needs your expertise in symbol interpretation to discover the secret it contains.

During your adventure, you will meet celebrities from the cemetery and discover its historic monuments, where puzzles have been hidden by an occult brotherhood: «The Brotherhood of Eternity»

This adventure uses the same mechanisms than the «escape game». The rules aren't explicit. The player must guess what he has to do next by considering the elements available in-app and around him.

No other knowledge except these elements are needed to resolve the enigmas. Be vigilant, you will always need to use elements from the urban decor to solve each puzzle.

The adventure is based on characters, documents and historical facts related to the Père-Lachaise cemetery.

During your walk, you will discover the richness of the mortuary art adorning the cemetery tombs as well as the funerary art of the Freemasons.

You will meet a famous elegiac sculptor and historical personalities such as Molière or Guillaume Apollinaire.

Once everyone on your team has downloaded the app, go to the Philippe Auguste metro station (line 2).

When you have arrived at the departure point, open the application and click on the button:

The adventure can be done entirely offline. You will not need an internet connection during the game.

ATTENTION : the cemetery closes at 5.30 pm in winter and 6 pm in summer. We therefore advise you to start the adventure before 2 pm
Official schedule

Discover the historical elements that were used to write this adventure.

The celebrities of Père-lachaise / Paris

The history of the cemetery begins in 1803, where the architect Alexandre-Théodore Brongniart was mandated by the prefect of Paris to build a new cemetery on the mound. He is also the author of Hotel Moncaco (Polish Embassy), Hotel de Montesquiou (Chinese Embassy) and the Palais de la Bourse. Its style of architecture is neo-classical. It follows the Greek and Roman principles of aestheticism. Typical elements are columns, pediments and porticoes. The mineral of stone is highlighted with facades where the carved ornamentations are rare.

This style marks a change from the baroque style which was in vogue during its appearance.

Allan Kardec is the author of The Book of Spirits. This work founded spiritualism and it is one of the most read books in the world. The spiritualist movement claims twenty million followers in the world including 6 million in Brazil. Allan Kardec is very famous in this country. Many cities even have a street named after it.

In spiritualist doctrine, the physical body is animated by a soul eternal. When the one dies and is recycled by nature, the soul joins the beyond. The soul of the deceased can use whatever energy it used to animate the body, the perisprit, to communicate with the living. The soul can also reincarnate, its conditions of life material of his future life will depend on the good deeds performed during his past life. However, during his reincarnation the soul will forget all memories of his previous life. According to the followers of this belief, man must follow a life of great morality to progress through cycles. Jesus of Nazareth is a model for them. Spiritualism sessions make it possible to consult the deceased in order to to get advice and wisdom.

Édith Piaf is a monument of French tradition music. Before to know fame, she had a difficult life. She was brought up in the brothel run by his grandmother. According to legend, his baby bottles were filled with red wine. Then, she joins her father to sing in a traveling circus. She got pregnant at 15, but her child died two years later. She has to prostitute herself to pay for his funeral. She was discovered when she was 20 by the director of a Parisian cabaret. This one will be assassinated a year later by the mafia. That will not prevent her from having a meteoric career.

When he was five years old, Jim Morrison witnessed a serious car accident. The victims are Indians. He claims that the ghosts of deceased merged with his soul. Native American shamanism was for him a great source of inspiration. He was noticed during his childhood by an asocial behavior while excelling in all subjects to school. Then it is his talents as a speaker and storyteller that will attract attention, although he often uses it to distract reality. At university, he studied the philosophy of protest, Nietzsche, Crowd Psychology, Cinema, and Medieval History. At this time he write poems after taking LSD, very easy to get at this time. It is in particular the courtyard on the crowd psychology and its failure in cinema, which will give it the idea of creating a rock band to practice collective therapy. His group, The Doors, became very popular. he excelled in the art of manipulating crowds during his concerts, he even provoked a riot in 1968.

Oscar was noticed during his university studies by his belonging to the decadent movement. He is the embodiment of the dandy, he despises manly sports and loves art for the sake of art. He is the author of several aesthetic essays. He advocates art as a way for social and personal development.

« People say sometimes that beauty is only superficial. That may be so, but at least it is not so superficial as thought is. To me, beauty is the wonder of wonders. It is only shallow people who do not judge by appearances.» Oscar Wilde, 1890

As you walk through the alleys of the cemetery, you will notice possibly many Masonic burials. The richest is without no doubt that of the Voisin family. 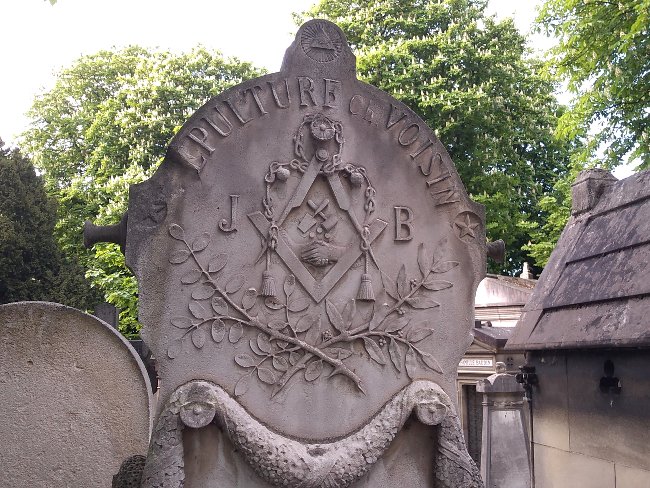